Called for a purpose

The Lord has sought out a man after his own heart, and the Lord has commanded him to be prince over his people, because you have not kept what the Lord commanded you.”

11 Then Samuel said to Jesse, “Are all your sons here?” And he said, “There remains yet the youngest, but behold, he is keeping the sheep.” And Samuel said to Jesse, “Send and get him, for we will not sit down till he comes here.” 12 And he sent and brought him in. Now he was ruddy and had beautiful eyes and was handsome. And the Lord said, “Arise, anoint him, for this is he.” 13 Then Samuel took the horn of oil and anointed him in the midst of his brothers.

Emboldened for the moment

Now the Philistines gathered their armies for battle. And they were gathered at Socoh, which belongs to Judah, and encamped between Socoh and Azekah, in Ephes-dammim. 2 And Saul and the men of Israel were gathered, and encamped in the Valley of Elah, and drew up in line of battle against the Philistines. 3 And the Philistines stood on the mountain on the one side, and Israel stood on the mountain on the other side, with a valley between them. 4 And there came out from the camp of the Philistines a champion named Goliath of Gath, whose height was six[a] cubits and a span. 5 He had a helmet of bronze on his head, and he was armed with a coat of mail, and the weight of the coat was five thousand shekels of bronze. 6 And he had bronze armor on his legs, and a javelin of bronze slung between his shoulders. 7 The shaft of his spear was like a weaver's beam, and his spear's head weighed six hundred shekels of iron. And his shield-bearer went before him. 8 He stood and shouted to the ranks of Israel, “Why have you come out to draw up for battle? Am I not a Philistine, and are you not servants of Saul? Choose a man for yourselves, and let him come down to me. 9 If he is able to fight with me and kill me, then we will be your servants. But if I prevail against him and kill him, then you shall be our servants and serve us.” 10 And the Philistine said, “I defy the ranks of Israel this day. Give me a man, that we may fight together.” 11 When Saul and all Israel heard these words of the Philistine, they were dismayed and greatly afraid.

23 As he talked with them, behold, the champion, the Philistine of Gath, Goliath by name, came up out of the ranks of the Philistines and spoke the same words as before. And David heard him.

26 And David said to the men who stood by him, “What shall be done for the man who kills this Philistine and takes away the reproach from Israel? For who is this uncircumcised Philistine, that he should defy the armies of the living God?”

31 When the words that David spoke were heard, they repeated them before Saul, and he sent for him. 32 And David said to Saul, “Let no man's heart fail because of him. Your servant will go and fight with this Philistine.” 33 And Saul said to David, “You are not able to go against this Philistine to fight with him, for you are but a youth, and he has been a man of war from his youth.” 34 But David said to Saul, “Your servant used to keep sheep for his father. And when there came a lion, or a bear, and took a lamb from the flock, 35 I went after him and struck him and delivered it out of his mouth. And if he arose against me, I caught him by his beard and struck him and killed him. 36 Your servant has struck down both lions and bears, and this uncircumcised Philistine shall be like one of them, for he has defied the armies of the living God.” 37 And David said, “The Lord who delivered me from the paw of the lion and from the paw of the bear will deliver me from the hand of this Philistine.”

Empowered for the task

41 And the Philistine moved forward and came near to David, with his shield-bearer in front of him. 42 And when the Philistine looked and saw David, he disdained him, for he was but a youth, ruddy and handsome in appearance. 43 And the Philistine said to David, “Am I a dog, that you come to me with sticks?” And the Philistine cursed David by his gods. 44 The Philistine said to David, “Come to me, and I will give your flesh to the birds of the air and to the beasts of the field.” 45 Then David said to the Philistine, “You come to me with a sword and with a spear and with a javelin, but I come to you in the name of the Lord of hosts, the God of the armies of Israel, whom you have defied. 46 This day the Lord will deliver you into my hand, and I will strike you down and cut off your head. And I will give the dead bodies of the host of the Philistines this day to the birds of the air and to the wild beasts of the earth, that all the earth may know that there is a God in Israel, 47 and that all this assembly may know that the Lord saves not with sword and spear. For the battle is the Lord's, and he will give you into our hand.”48 When the Philistine arose and came and drew near to meet David, David ran quickly toward the battle line to meet the Philistine. 49 And David put his hand in his bag and took out a stone and slung it and struck the Philistine on his forehead. The stone sank into his forehead, and he fell on his face to the ground.

Live victorious: Sin has been defeated

21 So I find it to be a law that when I want to do right, evil lies close at hand. 22 For I delight in the law of God, in my inner being, 23 but I see in my members another law waging war against the law of my mind and making me captive to the law of sin that dwells in my members. 24 Wretched man that I am! Who will deliver me from this body of death? 25 Thanks be to God through Jesus Christ our Lord!

13 And you, who were dead in your trespasses and the uncircumcision of your flesh, God made alive together with him, having forgiven us all our trespasses, 14 by canceling the record of debt that stood against us with its legal demands. This he set aside, nailing it to the cross.

But thanks be to God, who gives us the victory through our Lord Jesus Christ. 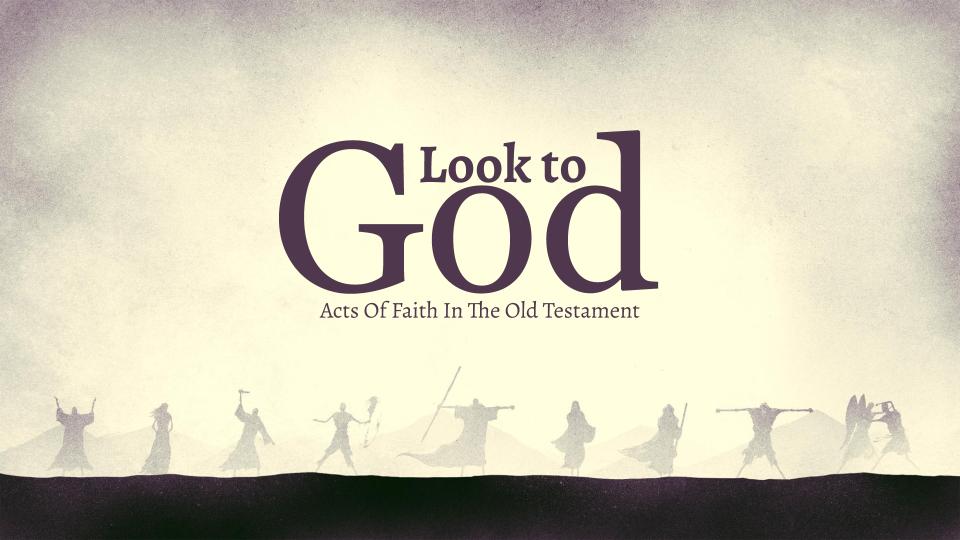 More in Look to God: Acts of Faith in the Old Testament